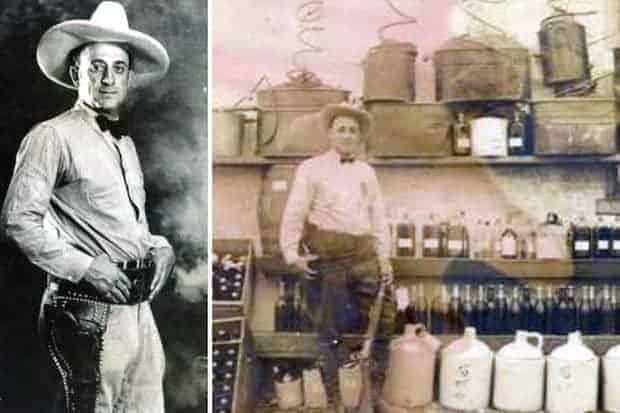 Al Capone is arguably the most famous organized crime figure of all time. The man is known as “Scarface” a nickname he hated, ruled Chicago with an iron fist during the 1920s and early 1930s until federal authorities sent him away to the penitentiary in 1932. Bodies littered the streets of the Windy City under Capone’s reign, as rival gangs fought for control of the illegal alcohol trade. Two of Al Capone’s brothers were also involved in organized crime and played important roles in his criminal enterprise. Frank Capone was gunned down by police in 1924. Ralph Capone embarked on a life of crime as well but lived to be 80-years-old.

A Capone Brother Goes His Own Way

One of the Capone boys, however, set out on a completely different path than his brothers. James Vincenzo Capone was born in Italy in 1892 and came to the United States with his parents when he was still a baby. He was Gabriela and Teresa Capone’s oldest child. The Capone family settled in Brooklyn, New York, where Gabriele worked as a barber to support his large family.

At the age of 16, James Vincenzo Capone decided he’d had enough of city life in Brooklyn, and he headed west. It was in the great open expanses of the western United States that Capone would reinvent himself. He wanted to hide his Italian ancestry, and he changed his name to Richard Hart, after his favorite film star. The man now known as Richard Hart told people he served in France during World War I. He settled in the small town of Homer, Nebraska after the war.

Hart not only changed his name but his appearance and background story as well. Nothing about the way Richard Hart dressed would lead people he encountered to believe that he was an Italian immigrant from New York. Just like the stars in the silent western films he enjoyed, Hart dressed in cowboy boots and a 10-gallon hat. He also carried a pistol on each hip. Hart told people in Nebraska that he was originally from Oklahoma, and that he had worked in the circus and as a cowboy, breaking horses and herding cattle.

The citizens of Homer quickly took a liking to Richard Hart, and he became the town’s marshal. In 1920, Hart became a federal Prohibition agent and he embarked on a career in law enforcement that saw him become something of a minor celebrity. The bravery and reckless abandon that Hart displayed while raiding illegal alcohol operations endeared him to many, and he earned the nickname “Two-Gun Hart.” Richard Hart’s work as a Prohibition officer was very ironic, as he was battling the same illegal industry that was making his notorious brother Al a millionaire in Chicago.

Hart then moved on to become a special agent for the Bureau of Indian Affairs, focusing his efforts on illegal alcohol on Indian reservations. Hart immersed himself in Native American culture and learned the language and customs of the different tribes he interacted with. His first destination was in South Dakota. Hart was so well respected by his superiors, that he was given the assignment of protecting President Calvin Coolidge and his family when they visited South Dakota’s famed Black Hills in 1927. Hart moved from reservation to reservation, from Nebraska to Wyoming to Idaho to Washington. Newspapers reported on his exploits wherever he went. One boasted of the fact that, in addition to his fight against illegal alcohol, the special agent had also captured 20 murderers.

Hart’s star rose until an incident in 1931 brought him back to Earth. After pursuing and hunting down a wanted Indian, Hart killed the man when he refused to surrender. After an investigation, Richard “Two Gun” Hart was charged with manslaughter, and he stood trial. He was acquitted by a jury, but the commissioner of Indian Affairs decided to fire him anyway.

Hart returned to Homer, Nebraska with his wife and four children. He once again worked as a marshal in Homer, and later was named justice of the peace. Things were never the same for the man who called himself Richard Hart, however. Times were tough during the Great Depression, and Hart was fired from his marshal and justice of the peace jobs for shoplifting from a grocery store. He was also kicked out of his local American Legion post after his fellow members discovered that the Department of the Army had no records of his service in World War I.

It was in the late 1930s that Richard Hart decided to reconnect with his past. His infamous brother Al was serving time in prison, so Hart reached out to his brother Ralph for financial help. Ralph took his long-lost brother in and gave him money and clothes. After his brother Al was released from prison in 1939, he and Hart had a reunion at Ralph’s home in Wisconsin. The general public learned of Richard Two-Gun Hart’s true identity in 1951 when Ralph Capone was brought up on tax evasion charges. Hart was brought in to testify during the trial, and he was outed as James Vincenzo Capone. Two-Gun Hart died the following year, in 1952, at the age of 60. He is buried in his adopted hometown of Homer, Nebraska.