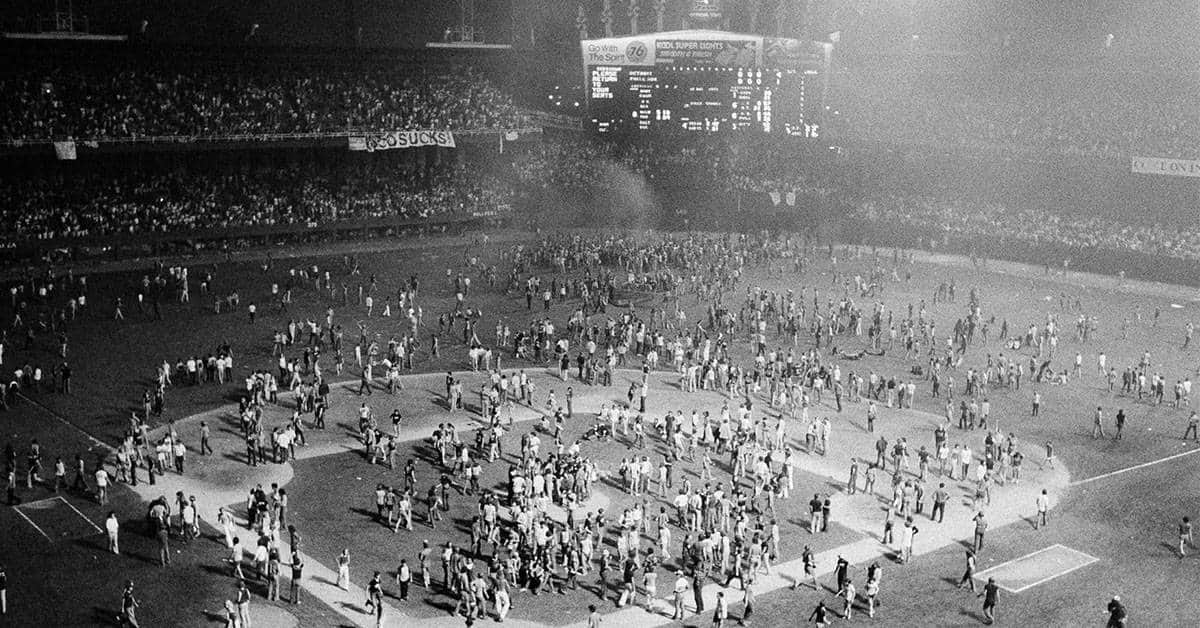 On July 12, 1979, the Chicago White Sox hosted a promotional night at Cominskey Park as a way to sell more tickets to the double header games with the Detroit Tigers during a particularly poor season.

The White Sox partnered with local Chicago WLUP-FM shock jock DJ Steve Dahl to host an anti-disco night that became known as Disco Demolition Night. Rock fans could buy a disco vinyl for 98 cents and bring it to the game. Between the first and second game of the double header, Dahl would destroy all the collected records in a big explosion.

The White Socks officials expected a crowd of 20,000, about five thousand more than their usual attendance. At least 50,000 fans wound up showing up. After the first game ended, Dahl came onto the field in army fatigues and took a lap around the stadium in a Jeep and his fans threw beer and firecrackers onto the field at him (lovingly). The crowd started a raucous cheer of “disco sucks.”

Meanwhile, the White Sox pitcher, Ken Kravec, started to warm up. Fans who became uncomfortable with the chaos started to try to leave but found all but one gate padlocked shut, attempting to prevent more people from sneaking in, but preventing all those trying to leave from exiting.

Dahl lit the explosives, destroying the records and ripping a large hole in the outfield grass. With the majority of the security at the doors, nobody was guarding the field. Between five and seven thousand attendees rushed the field. The White Sox pitcher, Kravec, was forced to flee and the players barricaded themselves in their locker rooms. The grass was ripped up, the batting cages were destroyed, the bases were stolen, and more records were set on fire, and a bonfire raged in center field.

Chicago police showed up in full riot gear to restore order. 39 people were arrested for disorderly conduct. The field was so badly damaged that it was deemed unplayable. The White Sox were forced to forfeit the second scheduled game.