16 Truths About the Rise of the Religious Right in America 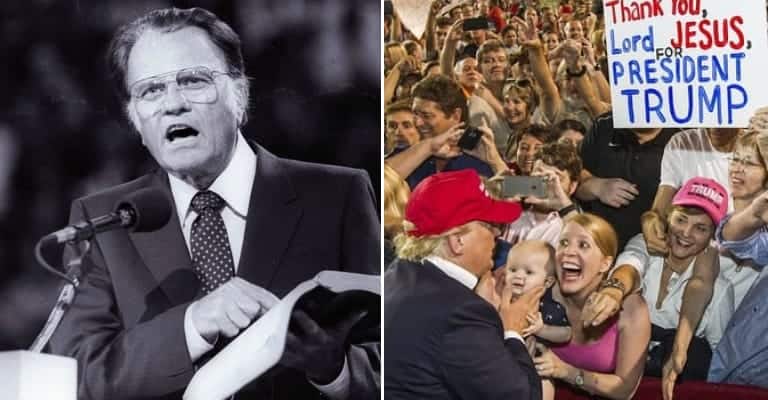 16 Truths About the Rise of the Religious Right in America

Remember the secularization thesis? Weber theorized that post-Enlightenment, society would become more secularized as people increasingly gave up religious values in favor of science and reason. What was beginning to happen in America, though, was a reversal of this trend. Consider that the founding of America was primarily a product of the Enlightenment. The Founding Fathers had been schooled in Enlightenment ideas and wrote them into documents like the Declaration of Independence, the Constitution, and the Federalist Papers. Political life, especially the political life of the new state they were creating, had no room for religion.

Around the time of the bicentennial, 1976, just as the issue of abortion was beginning to galvanize Christian voters, there was a shift in how Americans, particularly fundamentalist and evangelical Christians, told the history of the country. The Founding Fathers were purported to be devoted Christians who wanted to establish a new state on religious ideals when they were known to be Deists who had little concern for Christianity. The Christian public came to view them as champions of religion who had purposely written Christian values into Enlightenment-inspired documents (such as the Constitution). Not coincidentally, political action became seen as a religious value, in the present age as it had (supposedly) been at the time of the founding.

7. A Film Series by Francis Schaeffer Spread the Word About Abortion

In 1978, Schaeffer and his son, along with Dr. Koop, the surgeon-in-chief at Children’s Hospital in Philadelphia, produced the film series “Whatever Happened to the Human Race?” The film series directly attributed abortion to the replacement of Christian values with humanistic ones, which created a disregard for human life. In the first episode, Schaeffer pointed out that behind the legitimization of abortion and humanism was the pervasive idea that humanity is no more than a machine; without Judeo-Christian values, the dignity of human life has been severely depleted. Dr. Koop graphically detailed how abortions are performed and cited examples of when a baby who is born live is left to die.

According to the producers, these examples of infanticide are allowed to happen only because of society’s embrace of humanistic values rather than Christian ones. The production was intended to shock viewers into the realization that the Christian moral basis and human dignity that once upheld Western civilization have eroded, and the visible effect of that erosion is the murderous legalization of abortion. The production and distribution of the film series and book of the same title were perhaps the most significant events in turning conservative Christian opinion unequivocally against abortion and launching fundamentalist Protestants into the public sphere and political discourse.

Jerry Falwell, by his own admission, was not a political leader. He was a religious leader who was very concerned about the moral decline of America and believed that it could be reversed through political conservativism. He also had a considerable audience, largely thanks to “The Old Time Gospel Hour,” and they were foaming at the mouth wanting to do something about the crisis of legalized abortion. Falwell frequently engaged a man named Paul Weyrich, a conservative activist who is considered by many to be the father of the religious right.

Weyrich had long been on the conservative end of the Republican party, making him an outlier in his own party. He had proven key in getting evangelicals and fundamentalists to vote for Barry Goldwater in the 1964 campaign, mainly on the grounds of school prayer and the tax-exempt status of private Christian schools. However, those issues were not strong enough in the conservative Christian conscience to merit a large-scale turnout at the polls. The problem that incensed them enough to political action proved to be abortion. Weyrich recognized that galvanizing this massive voting bloc around the issue of abortion could shift the Republican party to a right-wing ideology that more closely resembled his own political views.

Conservative Christian voters had made some pretty public failures as they began their foray into national politics. First was the support of Barry Goldwater, who was a hard-liner regarding the Cold War. Billy Graham had long supported the president as a religious advisor, but with Richard Nixon, he threw his political support behind him and did all that he could to ensure Nixon’s election. The two had a public friendship, and Nixon appeared at some of Graham’s crusades. Christians rallied behind Nixon so fiercely that when the Watergate crisis unfolded, the future of Christian political engagement was called into question.

Jimmy Carter, though, seemed to be a specific choice. Though a Democrat, he was one of them, an evangelical Sunday school teacher from Georgia. However, his death-blow from his fellow evangelicals came when he announced his support of Roe v Wade, not because he personally approved of abortion, but because he supported the institution of the Supreme Court and its right to make decisions. Fundamentalist leaders, such as Tim LaHaye (author of the Left Behind series) and Jerry Falwell convened to try to figure out how to get Carter out of office. Despite his religion, they could not support a president who did not oppose abortion.

To help coalesce the growing movement of conservative Protestants and guide them into political action, in 1979, Jerry Falwell, along with others such as Tim LaHaye and Paul Weyrich, formed the Moral Majority. The Moral Majority was a political action committee that advocated political engagement among not only conservative Protestants but any conservatives who were concerned about the moral degradation of America. Its primary concern was ending abortion, but it also advocated legislation against homosexuality, pornography, and drugs. The Moral Majority proved to be remarkably successful; within just a few months of its inception, chapters could be found in all 50 states.

Despite criticisms of the movement, the Moral Majority proved to be influential in not only reshaping the Republican party but in reshaping national politics. For example, in Alaska, within six months of the Moral Majority’s establishment there, candidates supported by the Moral Majority overwhelmed the state’s Republican party. The movement’s state chapters espoused policies that Falwell himself disavowed, such as punishing homosexuals and openly discriminating against them for things like jobs and housing. They also tried to advocate for explicitly religious policies in public institutions, such as public schools and courthouses. However, Falwell tried to maintain that the Moral Majority was not a religious organization.

3. The Candidate of Choice was Ronald Reagan

Surprisingly, the candidate that Falwell and others in the Moral Majority chose to support was Ronald Reagan, a conservative Republican from California. What made their support so surprising is that as governor of California, Reagan had signed into law a bill that made the process of obtaining abortions easier! However, he used religious language in his speeches, especially when speaking at rallies hosted by Falwell, and claimed that he believed that life begins at conception. On the campaign trail, he spoke at one gathering of the Moral Majority in Dallas that had over 10,000 people present.

Reagan won the presidential election in a landslide against his Democratic rival, Michael Dukakis. Many have suggested that he would not have succeeded without the support of the Moral Majority; without its members voting for him, he would have lost by 1%. When Reagan entered the White House, Jerry Falwell became a close friend and confidante. However, Reagan only paid lip service to Falwell to ensure the ongoing support of the Moral Majority. He did not support any legislation aimed at ending abortion and frequently nominated people to government positions, such as Sandra Day O’Connor to the Supreme Court, knowing that Falwell would oppose them but still asking him for support.

On the campaign trail and later while in office, George W. Bush frequently employed religious language in his speeches. In speeches about the War on Terror, he spoke of the American people as a force for good that will overwhelm the evil that exists in the world. Bush even referred to the War on Terror as a crusade, and not in a blithe manner as in Billy Graham’s use of the term to apply to large religious gatherings. He was speaking of engaging in a war with an enemy – a Muslim enemy – on religious grounds because God had blessed America and given it a holy job to carry out.

The evangelical and fundamentalist voting bloc overwhelmingly supported Bush and his War on Terror, including his detainment of prisoners at Guantanamo Bay. Perhaps their support was not so much about the long-term implications of a perpetual state of war but rather because of his evangelical background and continual use of religious rhetoric. He regularly commented on his prayer life and asserted that he was doing what he believed God wanted him to do. He also opposed abortion and, unlike Reagan, did make legislative steps in the attempt to overturn the Roe v Wade decision.

1. Donald Trump Drew on This Heritage

Today, conservative Christian voters support President Donald Trump with an almost religious fervor. Over 80% of white evangelicals voted for Trump, and despite practices that don’t exactly resemble the traditional family values for which they advocate, continue to support him as if he is God’s man to lead the United States of America. This support is not accidental and draws on the whole of the history behind America’s religious right. Like Reagan and Bush, Trump uses religious language and is, therefore, able to win the hearts of religious voters. He claims to oppose abortion, still issue number one on their political agenda.

The most outspoken leaders of the religious right who support Donald Trump are directly connected to the rise of the religious right and the Moral Majority. One such leader is Franklin Graham, the son of Billy Graham and the founder of the charity Samaritan’s Purse. Another is Jerry Falwell, Junior, the son of Jerry Falwell and now pastor of his church in Lynchburg, Virginia. Today, the worlds of religion and politics have so closely re-merged that in movements like that of Donald Trump, one has a hard time deciphering whether it is inherently religious or political. What can be said is that he probably would not have risen to power without the history of religious right.

“With God On Our Side: George W. Bush and the Rise of the Religious Right in America.” Variety.com

“Evangelicals in the Public Square,” by J. Budziszewski. Baker Academic. 2006.

“The Man Who Mobiled The Evangelical Vote.” AJ+.