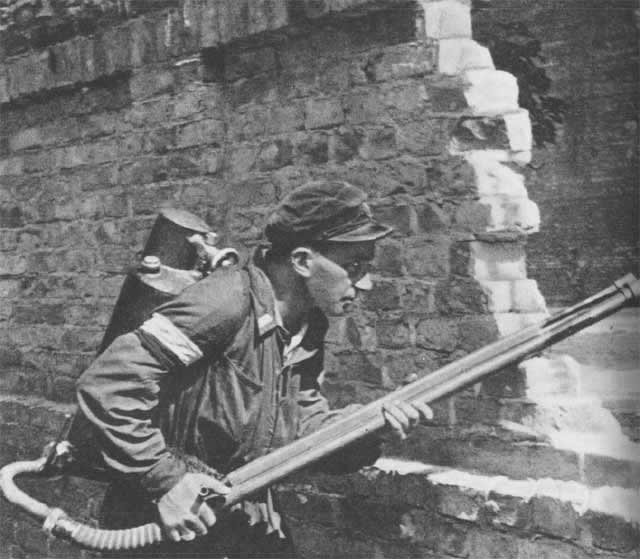 In the final days of World War II, the people of Poland found themselves between Nazi Germany and their old enemy the Russians. Brutally occupied by Nazi Germany since 1939, the prospects for their freedom looked very bleak indeed come 1944. Poland was faced with either Nazi rule or domination from Moscow. The Red Army army was now rapidly approaching from the East. Joseph Stalin’s thirst for power and his strategy of absorbing countries into the Soviet Communist Bloc, persuaded many Poles that they would only exchange German for Soviet rule. Many Poles hoped by expelling the Germans before the Soviet army came that they could set up a free Polish State. The Poles were initially successful, but they received no support from the Soviets, who were not far from Warsaw. The Germans were able to repress the Uprising. Many believe that Stalin allowed the Germans to end the Uprising so that the anti-Communist forces in Poland would be weakened or destroyed. Moscow, later set up a communist puppet regime in Warsaw.

The anti-German and anti-Soviet forces in Poland was the Polish Home Army. These partisans were already fighting the Nazis and pro-Soviet partisans in Poland. They were both anti-Nazi and anti-Communist.

The Polish Home Army planned a rebellion, codenamed Operation Tempest: a huge, coordinated effort by the underground resistance across Poland, and it was the largest military operation by any resistance group in World War II.

The Home Army timed their uprising with the movements of the Red Army through Eastern Poland, with the hopes that they would receive some support.

Resident in Warsaw at the time claim that Russian planes that were heard constantly flying missions against the Germans in the weeks before, Operation Tempest. They stopped when the Uprising began and the entire Soviet army seemed to suddenly stop attacking the Germans.

Stalin had ordered his troops to halt their advance towards Germany. He even issued direct orders that all support for the Home Army’s should stop and units in Russian-controlled areas should be disarmed.

Nevertheless, four days after Operation Tempest began on August 1st, 1944, the Home Army controlled large areas in Warsaw and the fight was on for the liberation of the city. The Uprising was not as successful elsewhere in the country.

Many of the Polish resistance forces had been training in urban combat for years in preparation but weren’t ready for a prolonged struggled against the ruthless German army and vicious SS troops.

The German’s reaction to the uprising was brutal and was a War Crime. Hitler ordered the Waffen SS to commit indiscriminate executions of civilians of all ages and gender. By the end of the uprising, as many as 200,000 civilians were killed in and around Warsaw, during the Uprising. On one day, it is believed that SS troops murdered tens of thousands of civilians .

The Home Army had up to 50,000 fighters and activists. The Germans began with some 25,000 troops, which was soon increased with more reinforcements. They also sent many tanks to recapture the city.

After the defeat of the Polish Home Army. The Germans destroyed much of Warsaw in revenge and to punish the Poles. It is estimated that some 85% of the Polish capital was destroyed.